Rotating machinery such as turbines, pumps and compressors are continuously subjected to major mechanical forces. As most of these machines are critical to the process, systems are implemented with protection and/or monitoring functions to prevent failures. In this article we highlight a few common speed-related failures that may occur with rotating machinery.

Overspeed is the biggest fear of any operator of rotating machinery. Not responding in time or the malfunctioning of an overspeed protection system could cause turbine blades or rotor parts to come loose. In the worst case, these parts go right through the turbine housing, compromising personnel safety and causing major damage to the equipment powered by the turbine.

Too rapid acceleration of a rotating machine can cause a rotating machine to go into overspeed despite the present overspeed protection system, causing a dangerous situation. Depending on acceleration speed, stopping the driver of a machine will not immediately lead to a decrease in the rotation speed. Due to major forces the speed may even increase from a short time after the driver has already been stopped. When an overspeed protection system trips when the limit value of 110% of the maximum tolerable rotation speed is reached, a certain degree of acceleration can still cause the accrued speed to exceed the allowable 110% (Figure 2). This way the machine still reaches a critical rotation speed, with damage as a result.

During the start-up of a rotating machine, depending on the available energy, it should be protected for acceleration. Unlike with overspeed protection, acceleration protection does not only look at the RPM, but at the increase of the RPM within a predetermined time interval. When the speed sensors detect an excessive acceleration increase, the protection system will trip the turbine.

It may occur that pressure from the process causes a compressor to turn in the wrong direction while the turbine that drives this compressor is not operating. This is known as reverse rotation. This pressure can occur because the suction valve does not close properly, causing a leak. When the turbine is started up during this condition of the compressor, this will lead to damage. The pressure that is built up as a result of reverse rotation and the pressure from the turbine will counteract each other, which may for example cause damage to the coupling. This often concerns financial damage, but does not pose a direct danger to personnel and the environment.

It is important that a turbine actually stands still before turnaround / maintenance work is started. After all, the enormous mass of a turbine can cause dangerous situations if maintenance work is started while the turbine is still rotating slowly. To monitor this, speed measurements must be made over a longer period than normal speed measurements because the turbine is running at a very low speed during its shutdown process.

Underspeed is the opposite of overspeed, but is a less critical failure. To keep a process running, an installation must maintain a minimum RPM. The process can no longer be driven with a lower RPM. Although underspeed is highly undesirable due to a disruption of the production process, it does not have the same catastrophic impact as overspeed. Limit values ​​can be set so that an alarm is triggered when the minimum RPM to keep the process running is reached. This allows the operator to prevent underspeed from occurring. Underspeed measurements can also be used to indicate, for example, that a jog engine can be switched on. 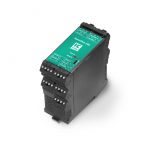 The SpeedSys 200 is a SIL2 certified overspeed protection system. The robust design with advanced self-monitoring, galvanic separated in- and outputs and certification by design make a high-end product that stands out in the market. The focus on the core safety functions make a system that is easy to use and to maintain, with very long proof test intervals.

Read more about the SpeedSys 200 »

To test and verify overspeed protection systems, Istec has developed the IST-101 Frequency Generator. This tool simulates speed signals, which allows the trip function of a protection system to be fully tested without creating an actual overspeed situation.

Do you have a question? Get in touch with one of our experts.

Choosing the right speed sensor for an application is of crucial importance for an accurate and reliable measurement. After all, the signal of the sensor is the input for an…

Monitoring machine vibrations affords greater control over the safety and availability of the equipment. It reduces unscheduled downtime and potential damage or failure can be resolved at an early stage.…